Always Play for Each Other

Congratulations Allie and thank you for Always Playing IV Each Other!

Allie is a middle school student and basketball player at PEAK Performance. More importantly Allie is a daughter, she’s a sister and she’s a friend. Less than a year ago Allie’s world changed forever. She lost her brother, Tyler, to a drunk driver. Her family’s life will never be the same. The loss of a sibling, of a child, of a friend is not something that simply “goes away” with time. I don’t pretend to know why bad things happen and I certainly don’t try to justify this kind of tragedy as “meant to be.” And neither does Allie. Allie didn’t simply accept what happened to Tyler that night. Allie did what leaders do. She raised her hand and made a committed to make a difference. She stepped up to influence kids in a way that WILL save the life of another family’s “Tyler.” The best definition of a leader I have ever heard is “a person of disproportionate influence.” Allie is a leader. Allie is now a GA Teen Influencer for MADD. She is actively encouraging kids to turn away from underage drinking and to help stop drunk driving. Thank you Allie.

I’d like add one thing. There was something that I couldn’t stop thinking about while I was writing out my notes for today’s presentation. Has anyone ever heard the saying…”if you think you’re important, stick your finger in a glass of water, then pull it out and see if there is a hole left in the water.” Allie, Tyler left a hole in the water and so are you. Anyone that cares for and loves others will leave a hole in the water. Tyler is that important, you are that important and WE ARE ALL THAT IMPORTANT! Thank you for teaching me that. Now I would like to introduce the Atlanta Dream President and GM, Angela Taylor and the entire Atlanta Dream team, to present the APIVEO Player of the Month award for June 2014. -Brad Jubin, APIVEO

Thank you Atlanta Dream, Zaxby’s, CBS Atlanta, Larry Smith, Bruce Price and Jeff McPhail for your enthusiasm and support. You have made a young lady feel appreciated and loved. That’s what is means to Always Play IV Each Other! 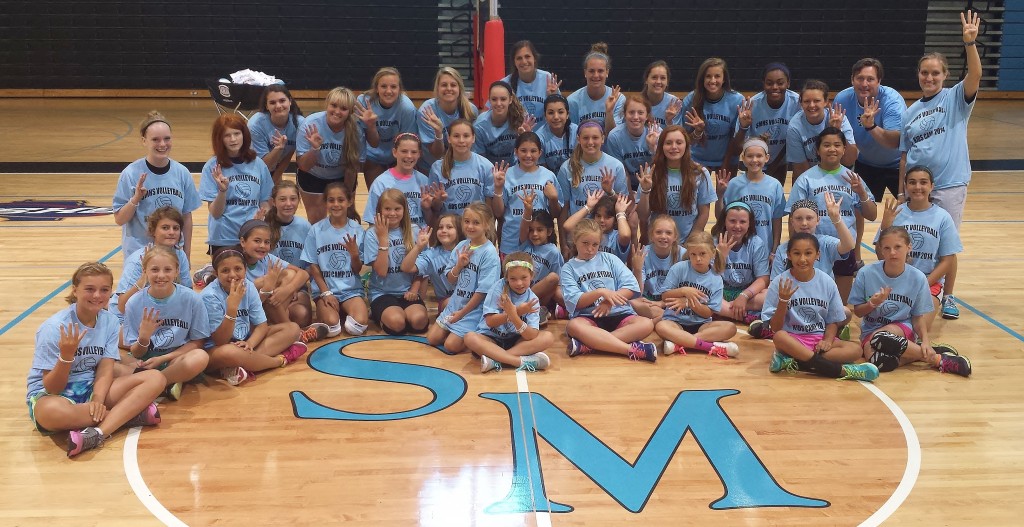 Thank you Starr’s Mills HS Volleyball Team! We had the opportunity to share APIVEO’s passion about leadership at the Starr’s Mill High School kids volleyball camp today. It was great to see our high school athletes sharing their skills, enthusiasm and heart with younger kids. This is how legacy is built. Afterwards our new friends took this inspiring legacy IV pic! SMHS Volleyball Always Plays IV Each Other…in everything they do! 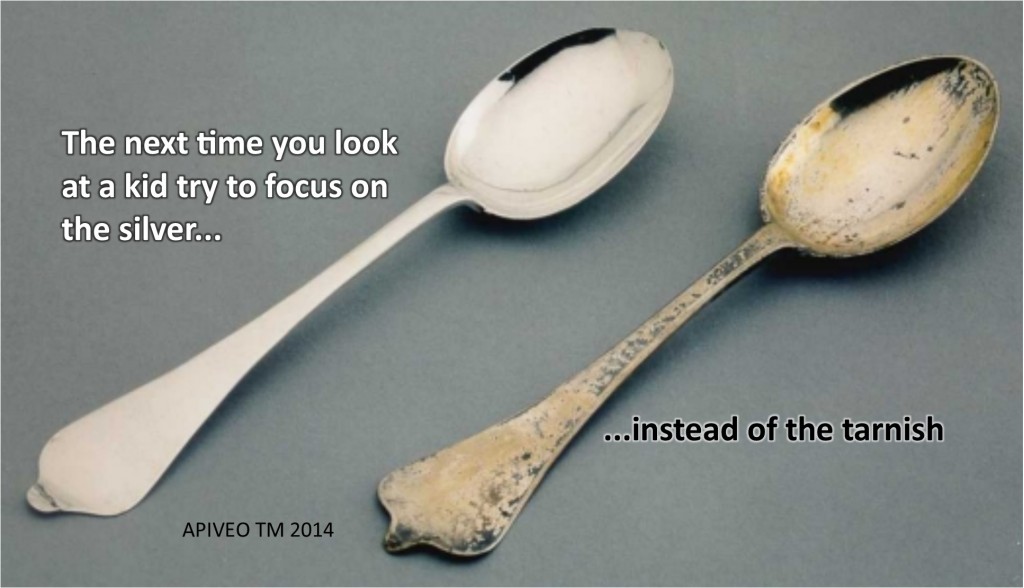 Would you throw away a tarnished spoon? Of course not. All you have to do to reveal the luster is polish it. After all, the spoon is not made of tarnish; its beauty and value are only obscured by it. The next time you look at a kid try to focus on the silver instead of the tarnish. That’s the first step in polishing the brightness into our kids. Brad Jubin, APIVEO

Congratulations Bradyn and thank you for Always Playing IV Each Other!

This evening we celebrate Bradyn Swinson because he Always Plays IV Each Other. There is no doubt that Bradyn puts others first; but he doesn’t do it by putting himself second. Bradyn doesn’t simply get out of the way so someone else ends up in front of him. Instead, he rolls up his sleeves and cares for people; he lifts them up and puts them in places they can’t always go on their own.

Bradyn is a student and baseball player at BEST Academy. He is described by his baseball coach as “his brother’s keeper” for his tireless dedication to the needs of his friends and teammates.  While Bradyn personally excels on the field and in the classroom, he steps up and actively helps his friends excel as well. Bradyn is a leader.

Now I would like to introduce the Gwinnett Braves Manager, Brian Snitker, and Gwinnett Brave, Brandon Boogs, to present the APIVEO Player of the Month award for May 2014. -Brad Jubin, APIVEO

Bradyn’s story will be shared on CBS Atlanta on Saturday, May 31st during the evening sports telecast.

Thank you Gwinnett Braves, Zaxby’s, CBS Atlanta, Ronnie Snitker and Jeff McPhail for your enthusiasm and support. You have made a young man feel appreciated and loved. That’s Always Playing IV Each Other!

Congratulations Jakson and thank you for Always Playing IV Each Other! 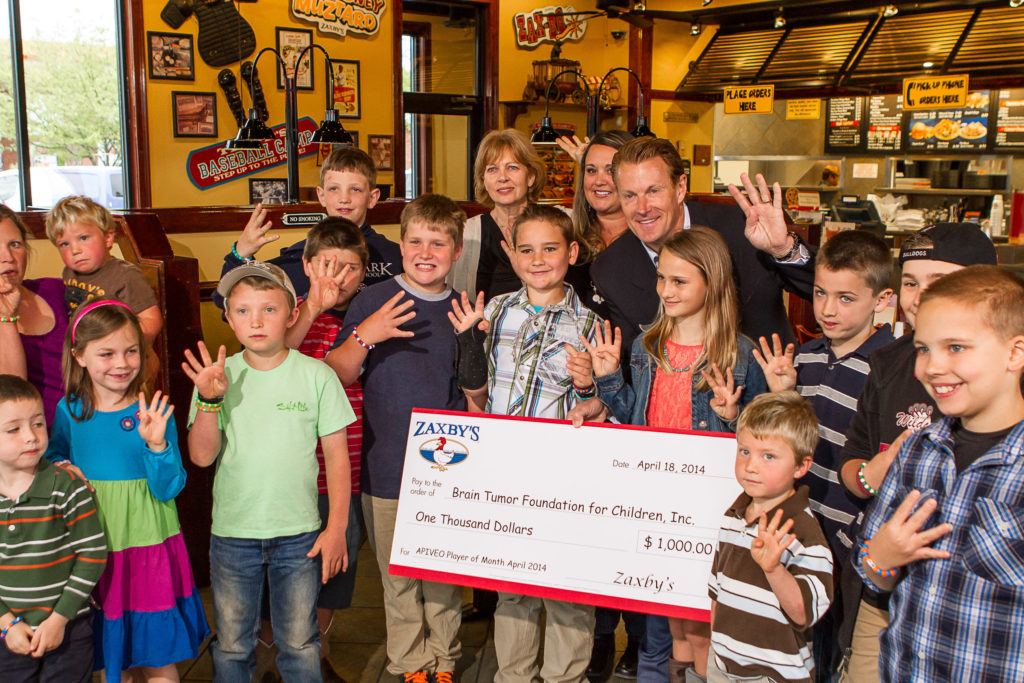 Jakson Mayer is the APIVEO Player of the Month because he Always Plays IV Each Other. There is no doubt that Jakson puts others first; but it’s important to understand that he doesn’t do it by putting himself second. Jakson doesn’t simply get out of the way so someone else ends up in front of him. He knows that won’t actually help anyone. He rolls up his sleeves and cares for people; he lifts them up and puts them in places they can’t always go on their own. Let me give you an inspiring example. Jakson’s 6 year old neighbor, Katheryn, was recently diagnosed with a malignant brain tumor. This obviously had a devastating effect on Katheryn’s entire family. Her mom, dad, three brothers and sister began a life changing journey into the unknown. Jakson reached out to family and spent time with them because this journey was not unknown to him. Jakson was present in their lives. He showed them he cared about them and what they were going through. In addition to ministering to the family, Jakson and his friends made bracelets to help raise money for Katheryn’s family and their mounting medical bills. This is true leadership. This is serving and loving the people around you. Jakson is a great kid; there is no doubt about that. But at 9 years old he is truly understands what Katheryn’s family is going through. Remember, I said that this was not an unknown journey for Jakson. On February 1st Jakson’s dad passed away from brain cancer. Jakson’s family is all too familiar with the struggles and pain that face Katheryn’s family. Because of this, Jakson realized that he not only knew how they felt but he knew he could help; so he did. I have read a lot of leadership books and I can cite several specific leadership characteristics that Jakson has demonstrated. The amazing thing is…Jakson hasn’t read any of those books. He leads through love. He does the right thing simply because it’s the right thing. I think there’s a good chance Jakson will be writing some of those leadership books instead of just reading them.

We have a special presenter here today, Zach McLeroy, CEO and Chairman of the Board of our sponsor, Zaxby’s. Zach has built a company based on and in servant leadership. We are honored to partner with him and his team on the APIVEO Player of the Month. As APIVEO Player of the Month Jakson has the privilege of naming a charity that will receive a $1,000 donation provided by Zaxby’s. Jakson has selected the Brain Tumor Foundation for Children. Here to accept the check is the foundation’s executive director, Mary Moore.

Jakson, thank you for caring, loving, serving and playing for others. What is in you is in every kid; and hearing about you will inspire them as leaders and inspire them to Always Play IV Each Other…just like you. Congratulations! -Brad Jubin- APIVEO

END_OF_DOCUMENT_TOKEN_TO_BE_REPLACED

Congratulations Connor and thank you for Always Playing IV Each Other!


Excerpt from the APIVEO Player of the Month award ceremony;

Now for the reason we are here today. On the ice Connor pours himself into the space between the pipes and gives every ounce of himself to his team. I understand he has some pretty impressive stats and a couple of awards and trophies to go along with them. Connor is a great athlete but that’s not why we are here today. We are here today because Connor McMahon is a great leader. Conner McMahon is the APIVEO Player of the Month because he Always Plays IV Each Other. END_OF_DOCUMENT_TOKEN_TO_BE_REPLACED