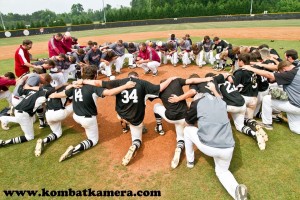 If you had the opportunity to see the Whitewater High School baseball team play this past spring. you had the opportunity to witness a group of young men serving and caring for each other through the game of baseball. If you looked in the stands, you had the opportunity to see students, families and fans Always Playing IV Each Other with their APIVEO signs and cheers. As the season started Coach Rusty Bennett, Head Baseball Coach at Whitewater High School, introduced APIVEO to the team and it quickly became much more than a simple rally cry or motto for the Wildcats. APIVEO became the way these young men, coaches and families lived. They lifted each other up emotionally and physically on and off the field and by doing so they made it to the final high school baseball played in the 2014 season. Unfortunately, the Wildcats came up short in that final game. Losing game three of the state championship was a bitter pill to swallow but growing into leaders that serve and love each other in the process is the real and lasting victory.

I first met Coach Rusty this past fall when he coached my 9-year-old son’s instructional baseball team. During the season he and the other coaches allowed me to teach a few APIVEO leadership lessons to the boys; including one lesson that was aired on CBS Atlanta. After nearly every practice Coach Rusty would ask me more and more about APIVEO. He was truly inspired to bring this simple, positive and uplifting leadership message to his high school baseball team. After seeing him coach my son I had no doubt he was serious about building a team of leaders that live to serve at Whitewater High School.

It was no surprise this past spring when I read the stories about the Wildcats outstanding performance on the field. Coach Rusty is a great baseball coach but there was a lot more going on than just great baseball with his team and their fans. The focus of the season was about helping, serving, caring and Always Playing IV Each Other. Winning a championship is the season-end goal of every team, however, you don’t become a champion by measuring it with a trophy at the end of the season. You build champions each and every day from the inside out. Character, leadership, sportsmanship, courage and confidence are the building blocks of champions and they must be laid one day at a time with great care and dedication.

I recently had the chance to talk to Coach Rusty about the Wildcats season and what APIVEO meant to his team. 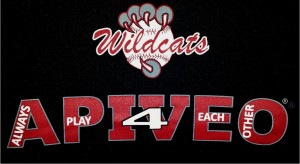 To start the season, I gave Coach Rusty APIVEO bracelets for the team but instead of just handing them out, he challenged his players. Coach Rusty told me, “…we had a Friday game and did our devotion. Once the devotion was over I brought out the APIVEO bracelets and gave a short talk on what my hope and goal for the team was.  I explained to them that we needed to play for each other in everything we do.  We need to come together as a group and be one team! I challenged them that if APIVEO meant anything to them then I would like for them to pick up a bracelet and wear it at all times.” He then added, “…every player picked one up and from that day forward APIVEO was talked about and delivered in every speech we had. The kids starting putting the team first and really started playing for each other. It became a habit and was something we did without thinking. It transformed our program as APIVEO was spread into our fan base and community.  I believe that it transformed our team and really helped us see a bigger picture and it helped give us an extra push to the state final!”

APIVEO is a powerful tool when in the hands of a loving and caring coach. Coach Rusty doesn’t coach baseball, he coaches young men through the sport of baseball. In Coach Rusty’s hands APIVEO became a life building and long lasting journey in leadership for his players, coaches, community and himself. Thank you Coach!

Play like the Wildcats and Always Play IV Each Other in everything you do! APIVEO!